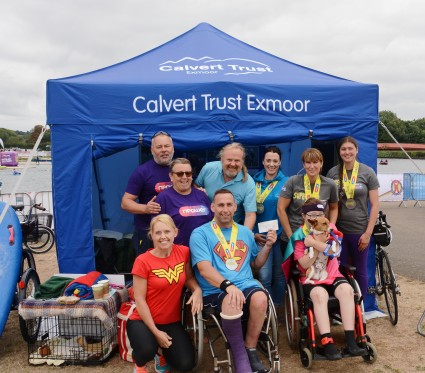 Three teams from Calvert Trust Exmoor participated in the Superhero Tri last weekend at Dorney Lake in Windsor, rubbing shoulders with the world of Paralympians and raising valuable funds for the North Devon charity that offers outdoor activity breaks for people with disabilities.

The second annual running of the event saw some 2,500 participants take to the water, wheels and heels to compete in this unique competition that focuses on disability. Each team of three must include at least one person with a disability. Regular Wistlandpound guest Daisy Gregory, 14, who has Down syndrome, completed all parts of the Sprint section with hersidekicks as helpers. She was also chosen to be part of 2012 and 2016 Paralympics gold medalist Jonnie Peacock’s Superhero Team.

“I had an amazing time, made some lovely new friends and loved being in Jonnie Peacock’s celebrity team!” said an extremely happy Daisy following the event.

Jonnie Peacock is a huge advocate of the Superhero Tri: “What sets this event apart is the fact that it is all inclusive, absolutely everyone can take part. It’s not restrictive in any way and there are no real rules or regulations about it either.”

o joined one of the teams: “David has cerebral palsy, and did a marvellous job completing the 10km cycle on a recumbent bike.”

David first visited the centre some 20 years ago on a work placement and recently got involved with the fundraising team. “I felt thrilled to be part of the team,” David said. “As a guest, I have witnessed firsthand the great work that goes on at Calvert Trust Exmoor, so I’m chuffed to be able to help out. Now I’m looking forward to getting involved in other events too, like the Spooky Cycle along the Tarka Trail in October.”

“This was my second time competing for Calvert Trust Exmoor at the Superhero Tri,” JoJo said. “This year’s event was certainly a step up from last year in terms of numbers, and we’re all looking forward to bringing even more Calvert teams to Windsor in 2019.” After successfully completing the event (some more than once), participants were presented with their Superhero medals and plenty of opportunity for photos to celebrate their achievements.

On top of the £1,000 raised by ‘Team Calvert,’ celebrity team captain and paraplegic adventurer Shaun Gash later dropped by the Calvert Trust Exmoor marquee to present a cheque for £750 following his team’s climb of Ben Nevis in the summer.