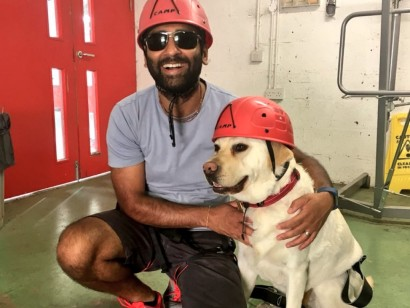 Celebrity guide dog, Kika and her owner, Amit Patel were treated to a weekend of activities at Calvert Trust Exmoor in July 2018.

Wife, Seema, arranged the surprise family break, taking up the Trust’s open invitation to come for a weekend after hearing about Amit’s negative experiences since losing his sight.

When London-based Amit suddenly became blind in 2013 after suffering a haemorrhage behind his eyes, he felt shut off, and initially never considered getting a Guide Dog. Amit says that being paired with Kika in 2015 changed his world and helped him to regain the confidence to get out & about again.

Nevertheless, Amit still feels vulnerable and he and Kika often face discrimination and a lack of consideration when travelling around the capital. Amit says that, while many people are very positive and considerate towards the pair, there are just as many people who ignore them when they require assistance, knock Kika with their umbrellas, or simply push past them. “They have loads of space to get past but they seem to think it is fun to barge into a blind person.” Kika sometimes becomes spooked and, with Amit unable to see why and feeling powerless, he decided to fit his sidekick with a GoPro camera to record their journeys for his wife to review and help them understand what was going on. As a result, Kika has captured various encounters of unhelpful staff and pushy, inconsiderate or unkind fellow commuters. “I’m conscious that I’m completely reliant on Kika when I leave the house, but that doesn’t stop me from getting on with day-to-day life.”

Guide Dog Kika has become quite the celebrity after sharing her GoPro footage across social and mainstream media, helping to highlight attitudes and raise awareness of the issues that people with sight impairments and other disabilities face in their daily lives. When the Trust witnessed Amit and Kika’s negative experiences, they asked if he would like to bring his family to CTE for a positive, confidence-building, fun-filled weekend, and discover a more inclusive side to travel. Amit’s wife booked them in a few weeks later but kept the trip a surprise. 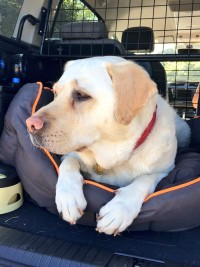 Kika (@Kika_GuideDog) and Amit (@BlindDad_UK) Tweeted and Instagrammed about what they got up to during their stay. From climbing to canoeing, Kika supported her ‘Dad’ every step of the way, and evidently they enjoyed every moment. Calvert Trust Exmoor has won several awards for its activities provision and it is easy to see why. The Trust’s instructors receive regular praise from guests for their passion, patience and dedication to helping people of all abilities reach their full potential. Amit tweeted: “This year is all about challenging myself. I did so many different outdoor activities before I lost my sight & I really miss that. Thank you @CalvertExmoor for inviting me here so I can prove to myself that my disability doesn’t stop me from being me! #ItsWhatYouCanDoThatCounts.”

“I’ve had an enormous fear of being in water since losing my sight; I don’t go swimming anymore because of it. So for me to be out on open water like this is such a big step & can you tell, I’m loving it!” 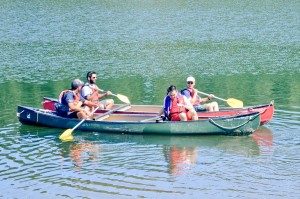 “Spent the afternoon cycling around #Wistlandpound reservoir on this amazing tandem bike with my brill instructor Matt from @CalvertExmoor. It was quite the experience in this heat but I got such a thrill!”

Following their stay, wife Seema said: “Amit had the most incredible time – he was able to do activities that he hasn’t been able to even consider doing since he lost his sight five years ago. He was able to physically challenge himself, push himself and get a rush from doing so. Very impressed with how [the centre] balanced the inclusivity of the groups with individuals being able to challenge themselves.” 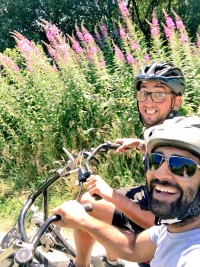 Since being paired with Kika three years ago, Amit has dedicated his life to volunteering for the Guide Dogs for the Blind Association, speaking at their events and undertaking corporate fundraising for the charity. Amit is also a motivational speaker and an independent accessibility consultant and most recently voiced Transport for London’s Priority Seating Week campaign. “It was a struggle losing my sight but now I love my life. Life is absolutely amazing for me now,” says Amit. “It’s more colourful than it was when I had sight.

“My visit to the Calvert Trust Exmoor has lit a fuse within me – I now feel excited & more confident at the prospect of trying out ’new’ activities and want to pursue more water sports in the future. I’ll definitely be back to the Calvert Trust very soon and would recommend it to anyone who is looking for some adventure in a safe & supported environment.”